I think this is a good news for all Soccer Game lovers. There is another offline soccer game for Android smart devices that has incredible and charming graphics and the gameplay is topnotch. You can now download the FTS 21 Mod PES 2021 Apk Obb Data for Android smart phones. Luckily, it has the latest player updates, stadiums, kits, logos and emblems, along with the latest soccer balls that you will find very interesting and entertaining. Frankly!

FTS 21 Mod PES 21 as a First Touch Soccer game mod for your Android smart phones gives you that feeling of the normal eFootball PES 2021. This is because they have the same features like the background music, colors and also the brand name. As a matter of fact, it is the updated version of Free Download FTS Mod PES 2020 Apk which I also shared earlier with you guys.

One major thing that always trigger gamers to go for a particular game is found in the place of the game specifications or features. That I have interest in playing most sports or adventure action games etc, is basically because of the features embedded into it during the development. So below are those things that make up this particular mod game known as FTS 21 mod PES 21. Below are the essential details about this game in talk.

Downloading Mod PES has so many interesting, entertaining and enticing features that will really get you excited as a Soccer Game lover. It has the full license of players and also the current update on players’ data and transfers. Even though it features, do not supersede PES 20 FIFA 14 Mod, but it friendly size of just 400MB is quite interesting compared to FIFA which is over 1.2GB.

FTS Mod PES can ably function on Android smart device that is lesser than 1GB of RAM without any hitches. So this implies that you don’t have to worry if your internal memory is not up to 1GB before you can be able to successfully extract the size file and run the game. For the facts that you can play it offline and it has a mode no Android soccer game has which is ‘become a legend’, makes it a Soccer Game you will definitely find so much delight in playing.

Other fascinating features of the FTS Mod PES is that it gives you the allowance to make or customize your kits and logos, modify the game settings to your own desire, and also you can ably design a stadium of choice and get it named. Just as it is in real world of football, you can play this soccer game as a manager. So if you follow the season’s calendar meticulously, try to be among the top 4 on the league table to qualify for the highly revered UEFA Champions league, if you are fifth, you end up in the Europa league.

FTS Mod PES 2021 gives you that advantage of being able to buy and also sell players in exchange for dollars to invest in your club. You can have normal training session with your players, and also be able upgrade the standard of your stadium. Ideally, it would be quite better and enjoyable for you if you choose the hardest level which is – difficulty, because you can be able to test your skills and see if you can challenge or win all these top teams and as times goes on, you will definitely become conversant with it and you will now be able to win top teams without much difficulties. 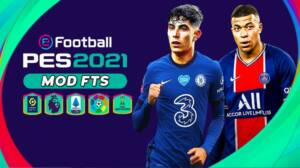 Another feature that this game has that has made me to love it with passion is the graphics and how realistic it looks when you are playing league games. So it doesn’t really matter the low class team you choose on Spanish La Liga, the top teams will take the top 3 positions: Barcelona, Real Madrid, Atletico Madrid, and also the 4th is usually Sevilla. Though it doesn’t always happen all the seasons, but they try to dominate the league table as it has always been in reality.

Its control pattern is somewhat similar to DLS 21 (Dream League Soccer), just that this FTS Mod PES 2021 has PS (PlayStation logo) and keys type. As a matter of fact, this soccer game is very entertaining and interesting. You will be glued to your device when you start playing it because of how fascinating it is, especially the graphics.

The match commentary is very entertaining and awesome, you don’t necessarily need to download any additional file for this, and it will still remain at 300MB – 400MB on your device. The match commentary often mentions some key players’ names like Messi and Ronaldo, also because of the nature of how hard modding games are, not all players names will be perfected. 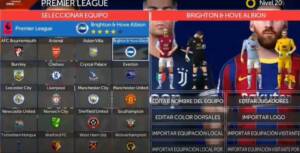 The grasses on the pitch of FTS Mod PES 21 are very special with variety designs, which means you can always choose any stadium grass you feel comfortable on. Expectedly, there are some really special skill moves that works similarly like Dream League, you simply just swipe or double-tap. Simple right?

If you can remember vividly, I wrote an article about Kits of DLS. Those URLs still work on First Touch soccer, so all you need to do is simply to copy and paste any of your favorite football clubs kits like Chelsea, Real Madrid, and also Juventus players. But frankly, you don’t really need to do all that because this FTS Mod PES 21 game already comes with the latest updated kits for Home & Away.

Change to your choice of Language

The most spoken languages are featured on the game like Italian, French, Portuguese, etc other than English. The commentary will also change to match the language, and the game size doesn’t change, it remains the same. This is indeed great!

So if you have followed me to this stage, all you need to do now is to just download FTS Mod PES 2021 OBB data and Apk app and also install it on your smart Android phone successfully.

I have tried to display different screenshots of the gameplay in virtually all the paragraphs. I have also listed some procedures below on how you can install the game successfully on your smart phone. 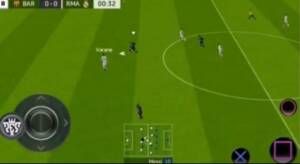 That’s all for this offline mod game. You might want to explore our game lists ranging from the oldest to the latest or current newest games. Right in the game category are different types of games like PS4, Xbox one, Nintendo, PES, FMM, FTS, DLS, Fifa 2021 , PPSSPP, PSP, PSX and some other action adventure games.