Any moment from now, users of Apple product will wirelessly charge
their device. And in this case, rumors have it that, most iPhone devices which
are going to be launched this present coming month September, that such feature
is embedded in them. So we have outlined what this actually entail below and
how to add or set up the wireless charging to your iPhone now. Read on for the
guide and settings.

Note: The wireless charging you are thinking of is not truly
what it is. What they meant by wireless charging is not charging your phone
over the air but rather, you will have to plug a device into the mains, and
after then, your iPhone will be connected to the device, but won’t be through
cable, and this goes a long way in making it wireless charging. And also good
enough to benefit so many users.

In case you are wondering if wireless charging is something
you might want to use on your device, then below, there are numbers of pros and
cons you can read from, so as to make the right decision.

Before now, most of other Mobile phone manufacturing
companies have already embedded such on their devices. Starting from Electric
toothbrush to the latest Samsung Galaxy S8, all are inductive charging as you
may know.  And below are what inductive
charging entails.

Inductive charging simply involves 2 coils of copper wire (having
a core of iron), the first one is in the device you are actually charging (or
can as well be in the case which is attached to the device) and the other in a
pad or mat on which the device is to lie on. So when the two coils are put next
to each other, an electromagnetic field is always created which tends to allow
electricity pass between the 2 coils.

Don’t Miss: See How The NewMethod Of Apple Peer-To-Peer Payments Will Work On Your iPhone – iPad.

So while the 2 devices need to be touching, the coils can be
sealed within the devices. And this implies that, the device can actually be a
waterproof. And mainly, waterproofing is the benefit of wireless charging. 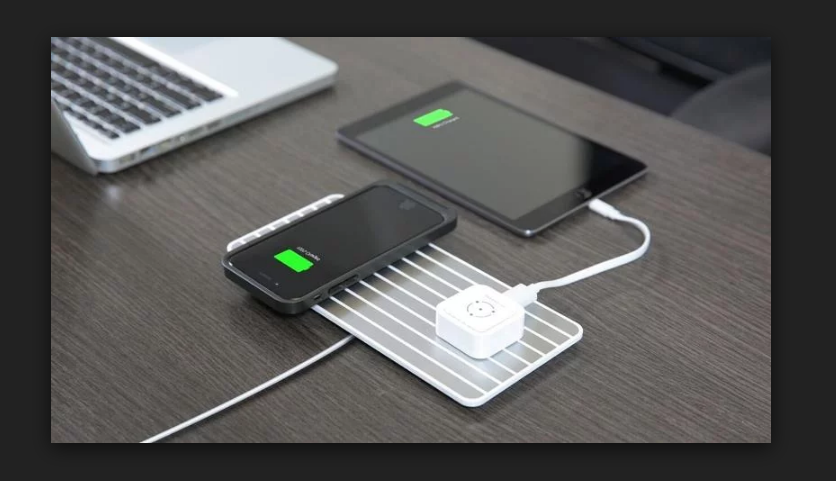 Knowing the kind of
wireless charging iPhone 8 will offer:

The trending gist has been that iPhone 8 is coming with a built
in wireless charging. You can check out the leaked specification of iPhone 8with image here. And haven seen the image, it looks like the back of iPhone 8
will be embedded with the coil responsible for a separate wireless charging.
And looking at the way things are now, it seems Apple will include similar
charging cable feature to Apple Watch devices. Remember, this particular spec
has a fast/speed charging rate.

Direct information from source, said that Apple encountered
some challenges regarding to the implementation of this technology in their iPhone
product. So it is possible that we might not see the feature in the about to release
iPhone 8 device. Another rumor going on is that iPhone 8 is possibly going to
charge across room.

Another finding is that Apple company is currently
researching on ways in which it can power its devices using mobile and Wi-Fi
signals. As it was stated in Telegraph back then in April 2017, that Apple
would simply “direct the electromagnetic frequencies, being used for data
transmission, towards device to serve as a “beam” of energy.”

Based on Bloomberg report regarding to what Apple is working
on in this 2017, that is the longer range wireless charging, which is
potentially a range of about 1 metre. It could be made available by another
possible wireless charging called Resonance (or Resonant) Charging.

There are lots of long range wireless charging technology,
but the major issue or problem with them is their efficiency, as the power is
sometimes lost to the environment. And most times, the long range charging is
likely used for low power devices such as remote controls.

HOW TO GET WIRELESS
CHARGING ON YOUR IPHONE DEVICES
>> In other to get wireless charging for your device,
you need to go for a specially designed iPhone case or any device that plugs
into your iPhone.
>> You need to get a separate pad or mat in which your
iPhone can be placed for charging.
>> For it to work, you need to plug the charging base
in to a power source.

WHY DO I NEED TO
CHARGE MY IPHONE WIRELESSLY?
Below are pros and cons why you should charge your iPhone
with wireless charging technology.

Pros of iPhone wireless
charging
>> It is a bit more convenient than when plugged using
a charger.
>> You are able to charge more than one device at a
time if the pad you place your device is large enough.
>> Your device can be a waterproof because the
induction coils don’t need to be in direct contact for it to work. In other
words, they can be completely sealed inside your iPhone device.
>> Get your
iPhone charge wirelessly, gets to free up its lightening port and as such, you
can use it for other purposes, like headphones if it is iPhone 7 etc.

THE DIFFERENT
STANDARDS OF WIRELESS CHARGING INCLUDE:
It may interest you to know that, there are 2 major groups
of iPhone wireless charging and they include:

>> The Wireless
Power Consortium and
>> The AirFuel
Alliance charging.

The Wireless Power Consortium is the type of wireless
charging that uses Qi (pronounced Chee, like tai chi). And that is the standard
that Samsung smartphone company is currently using for their Android devices.
And talking about ‘AirFuel Alliance’ this type of wireless
charging technology is formed by a merger between A4WP and PMA in the year
2015. Within some years, PMA partnered in business for the sole reason to get
its technology into places. And within that period, it technologies were placed
in so many different places such as Starbucks. And to have it, Starbucks launched
their wireless charging points into different 10 shops in London as at 2015.
The 2 standards as explained above uses different
frequencies and also connection protocols. The both uses inductive charging.

Read Also: How To Speed Up Your iPhone Charging Rate.

LIST OF BEST PRODUCTS
FOR WIRELESSLY CHARGING ON IPHONE DEVICES
Since wireless charging is yet to be featured on iPhone iOS
devices, there are still better options users can go for when it comes to that.
So below are easiest and helpful ways you can enable wireless charging on your iPhone
devices.